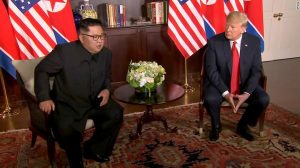 The Summit has come and gone.  What was agreed to?  It will be anyone’s guess as the media now will try and chase down the detail.  Lord knows, we will be unable to rely on the President.  What we are left with is Trump’s own magnified sense of what he can negotiate. As Dan Balz of the Washington Post wrote:

The president is counting on his personal skills to convince Kim that abandoning North Korea’s nuclear weapons program, and the security it provides him, is in his country’s and the world’s best interests. That will require hard bargaining in the future. But the joint communique signed by the two leaders offered scant concrete evidence to back up the North Korean leader’s pledge to “complete denuclearization.

So, we are likely to witness an almost endless cycle of media efforts to determine what was agreed to by the DPRK and the U.S. So, enervating! And meanwhile as Balz makes clear we will wilt under the impetuosity of an ill-disciplined President.

To reach the goals Trump has outlined will require discipline and commitment that has not been part of the president’s foreign-policy tool kit. And he must resist the kind of impetuousness he displayed on his way to Singapore when he abruptly withdrew U.S. support for a joint communique negotiated with other nations at the Group of Seven meeting in Canada. Thicken Stereo Feather Velvet Mattress, Tatami Double Single Bed Student pad Quilted Mattress Elasticated Corner Straps-B 120x200cm(47x79inch) at Canadian Prime Minister Justin Trudeau’s post-meeting news conference created a rupture in relations with America’s closest allies. 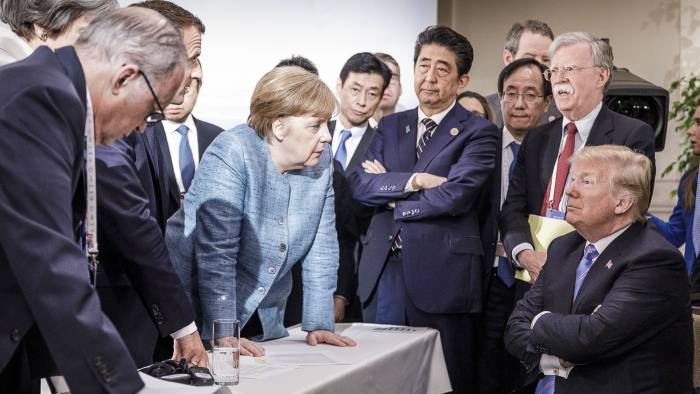 What a weekend of summitry! Look at that intense discussion among leaders.  A deeply troubled alliance; and a deeply fractious G7 meeting in Canada.

There is much one could comment on but let me just frame one encounter.  First, it this Trump statement – his call for readmitting Russia to the G7, returning it to the G8 is Trump at his most incendiary.  If nothing else he is the master of controlling the news cycle.

Leave aside the fact that such a readmittance would have to be agreed to by all the members.  It was evident that the statement by Trump took everyone by surprise.

And leave aside that in his initial statement where he failed to raise the Russian annexation of Crimea  and Russia’s current involvement in the Ukraine, though later he suggested it was a long time ago.

Leave all these matters aside. The call by Trump for Russian readmittance is really a most odd reflection on the architecture of global summitry. It has me baffled.  Here is Trump’s original comment:

Whether you like it or not, and it may not be politically correct, we have a world to run and in the G7, which used to be the G8, they threw Russia out. They should let Russia come back in because we should have Russia at the negotiating table.

Yes, Russia has been ousted by the G7. But there is a G20. And, indeed Russia is a member of the G20, last I looked.  And if Trump is truly convinced that these countries – the G7 –  have a ‘world to run’ well, might I suggest Trump consider China before he worries about giving his pal Putin a pass on the Crimea and the Ukraine and invites Russia back in.

You’d have to be in Antarctica, maybe not even there, not to see the growing chaos in the liberal international order (LIO) since Donald Trump’s election as the 45th President of the United States.  And, it is evident that the election of the ‘Great Dismantler’ does not nearly explain the growing turbulence in international relations. Rising great power rivalry, the rise of populist leadership in liberal democrat countries and the growing authoritarian swath of global leadership – all this, and more. impact and undermine the LIO.

So, it is fitting, I think, to announce the ‘First Glance’ series at the RisingBRICSAM blog.  On the weekend of the G7 in Charlevoix, Quebec with Trump anger and accusations at full tilt targeting his G7 allies, and Trump’s early departure to fly to Singapore for his summit encounter with the DPRK’s Kim Jong Un, it is the right time to rev-up the blog.

The ‘First Glance’ posts will, I hope be relatively frequent.  They likely will be shorter than the traditional RisingBRICSAM posts – more from the hip, but with a desire to inform closer in ‘real time’. The LIO is under stress and from the country most responsible for its building.  What is happening,  and the course of international relations and the LIO demand greater attention.